What to do with a semi-scary squeal-inducing seal? One of 4.5 million tasks when a museum tidies up 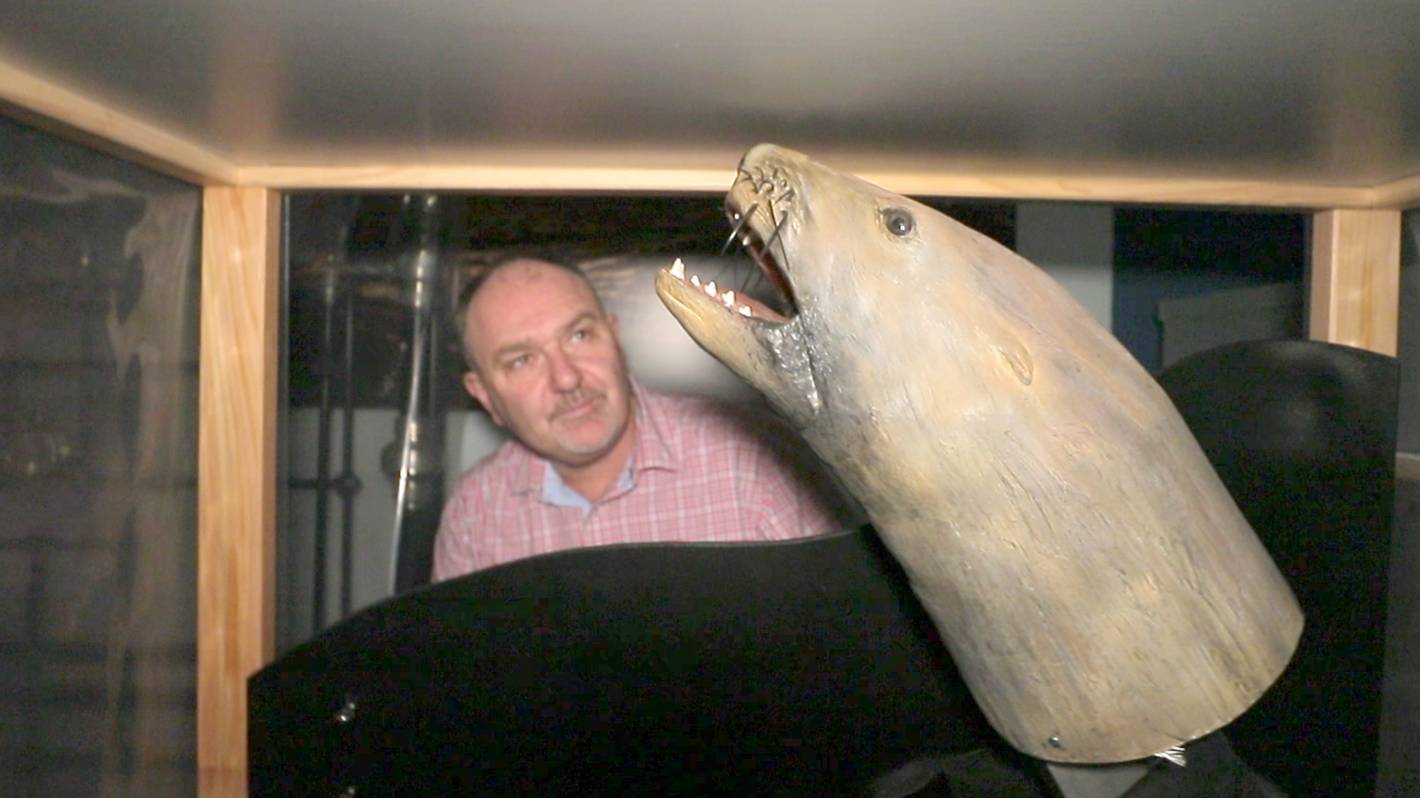 Close up you wouldn’t think so. He’s at best a passably plausible prop head. But that’s not the point. He knows how to make an entrance.

He’s generated many hundreds of thousands of childish yelps – not all from youngsters – when he’s risen up from behind a fake rock to fair roar at visitors to the Southland Museum and Art Gallery’s longstanding Roaring Forties exhibition.

In common with 4.5 million other items in the museum, Rory’s now heading for storage.

READ MORE:
* Southland Museum board to take stock of collection
* Southland museum collections enjoyed from the comfort of home
* Museum artefacts with ‘Southland story’ to get priority

The facility has been closed since 2018 as an undue earthquake risk. A $65m new-build project is now on the planning books and in the meantime, the small matter of rationalising the collection and packaging up the whole shebang for safekeeping is well underway.

All well and good, but in the midst of a vast amount of research in pursuit of diligent and ethical decision-making what to do with fake old Rory?

What abiding cultural value does a mere prop have?

Their first encounter, accompanied by parents or teachers, might be unsettling, but countless kids would reliably return to reassess their own reactions. Perhaps to confirm their enhanced bravery. Perhaps to scrutinise him more closely.

More than a few have sought to touch him and see if he would snap at their fingers with those mean little teeth.

But they couldn’t get near him because somewhere down the line Rory has, rightly or wrongly, been bestowed with something very important to libraries throughout the land, and the world.

An accession number of his own.

That makes him an exhibit in his own right. One upshot of which was that he was categorised as for looking at, not touching.

Well enough of that, the museum’s board has decided.

“He can go back to being a prop,’’ says the Invercargill City Council’s manager of museum services Wayne Marriott. “We want to take Rory to places where he can be seen.’’

And in a more up-close and personal way.

Should he show up at other entranceways at other museums, A&P shows or events, you should now be able to give Rory a pat, or even a cuddle if you want to.

“I wouldn’t,’’ Marriott the renaissance man is quick to add. “But you should be able to. He should be accessible to the community.’’

Other collection items remain ill-suited to hands-on appreciation, and it’s not always with the sole aim of protecting the objects.

Feel like carefully stroking some the of bird collection? Keep your mitts to yourself. Back in the day, birds were preserved using arsenic.

As things stand 91% of the 4.5 million items – from giant whale skeletons to individual photos to the tiniest of rocks – are boxed and ready for storage at a new site in the Tisbury suburb on the edge of town.

But the last 9% will be the longest to process; a task that often requires detective work to inform the final decisions.

The keyword here is provenance. It’s the record of ownership of a work of art or an antique, used as a guide to authenticity or quality.

Marriott accepts there’s some truth behind the old story that when local body tip charges go up, so do offerings to the museum, even if it’s as a stop-off en route to the refuse site.

More regrettably still, there are cases of dump-and-run items left at the doorstep.

Even if there’s something intriguing in there, without knowing the background, including the details of ownership, and without having a formal contractual agreement with the donor, such offerings cannot be accepted.

It gets trickier. Depending how far back you go, the specific contractual nature of the donations had variations of their own, further complicated by the passage of time.

For instance, a century ago someone may have brought the museum an item that is no longer appropriate for that collection but may be for another museum in another place.

“Before we can make that transfer we have to make sure we have the right to do that. It may mean a lot of research into wills, family trees, executors, descendants of executors … ‘’

It must be a decision not only the museum governors but also the original donors or their representatives, would be comfortable with.

Bit of respect is needed for the superior props as well. Among the museum’s largest exhibits is a recreation of the rolling deck of the bullion-carrying General Grant, a vessel wrecked at the largest of the Auckland Islands in 1866. Visitors could climb on board to experience the unhappy moment it hit the cliffs

That’s one prop that won’t be going into a box. Just what happens to it long-term becomes a matter for discussion with representatives of the Tiwai smelter apprentices who, back in the day, did such a nice job constructing it.

Some of the collection reclassification processes may be internal, as in Rory’s case, moving an item from the collection proper to educational status.

Consider the aisle of old typewriters held in the SMAG’s innards. The best examples in the best condition might be for display only, but others might provide hands-on experience for school classrooms.

Marriott fair beams at the memory of a young student’s puzzled stabbings when given a rotary-dial telephone and asked how he’d make a call on it.

Museums such as SMAG are not just about pre-colonial, Victorian and Edwardian items, Marriott says. A good old 1950s kitchen recreation, formica table and all, have their own evocative fascinations.

Ultimately, should an item be considered no longer to fit the needs of the museum, or another one elsewhere in the region or country, there’s a further option.

Put it under the hammer at a public auction house.

Again, the protocols are particular. Any proceeds must be used to finance the collection itself, not to pay bills for other tasks like regular running costs, or large building projects.

Museums do have acquisition budgets, carefully used. Ask Marriott for a recent example and he produces an artwork by R P McGoun​ who was not only a skilled hand at the canvass, also the first clerk and treasurer of Southland County.

It was misidentified in the catalogue as a coastal Tiwai scene, which pleases Marriott because it confused other punters and helped him get it for $650. It’s now going to spend time at the island’s Rakiura museum.

Why? Collegiality. Museums don’t clasp their taonga to their chests in the manner of Gollum with his prescioussss.

Says Toitū Otago Settlers Museum exhibitions and collections manager Jane Macknight: “The museum sector is relatively small. We all know each other and communicate often to discuss best practices.

“And we always​, always​ talk about provenance and discuss where items might be best (placed).’’

Southland’s museum is far from the only one where the protocols for accepting donations weren’t exquisitely consistent down the years.

“Every museum in Australasia, possibly across the western museum world, would have had a range of collection processes over the life of the institution.’’

Agreeing and applying the best standards isn’t a matter in which they labour spasmodically or alone, she says. Well-established guidelines now exist and are widely shared and readily published to inform communities.

But the collection rationalisation process isn’t simply a case of where there’s a will there’s a way.

Resourcing to do the work is an issue.

In Southland, the imperatives of the closure and upcoming have certainly peppered things along. Seven people, a couple contracted, have lately been working elvishly on the museum collection and some staff from the Splash Palace municipal pool, currently closed for significant maintenance and improvements, have been making themselves useful.

All going to plan, the task will be completed by the end of the year.

One of the smaller, but more tantalising tasks, that lie ahead is attending to a box containing Edison phonograph and amberol recording cylinders. Amberols were played on Amberolas, the machines most people had before the phonograph.

Just what they each contain hasn’t yet been determined, but there’s a real sense of potential about the task because some of them were recorded in New Zealand.

“The last time someone went through a collection like this,’’ says Marriott, “they found a rare recording of (Prime Minister Richard) Seddon.’’

Amid such tasks, there’s also no lack of routine preservation work to maintain at the same time. Any museum worth its salt seeks to preserve items same condition they received them, or better. But particular challenges arise.

Southland – let’s not beat around the bush – is a bugger for borer.

Cockroaches no. Silverfish, bit of an issue. But borer is the biggest challenge, Marriott confirms.

They don’t use borer bombs.

“We have freezers where we place picture frames and wooden objects, so we’re not burning a whole heap of chemicals into the surrounding environment.’’

For all the challenges of determining the background of items in the museum’s possession, Marriott is profoundly grateful for one thing. The earliest contributors to the collection weren’t archaeologists but, as fossickers go, they were a disciplined bunch whose records reliably contained good, information about where in Southland their discoveries came from.

It’s a degree of precision many a museum curator would envy, and it helps circulate items appropriately throughout the south.

As for the Tisbury storage facility; it’s shaping up to pretty much a big box. A container of treasures rather than a treasure itself. But it won’t defiantly be closed up. There will be provisions for public access, by appointment, for researchers, notably the large photography collections.