Quite the catch: WR Cooper has been everything Browns hoped 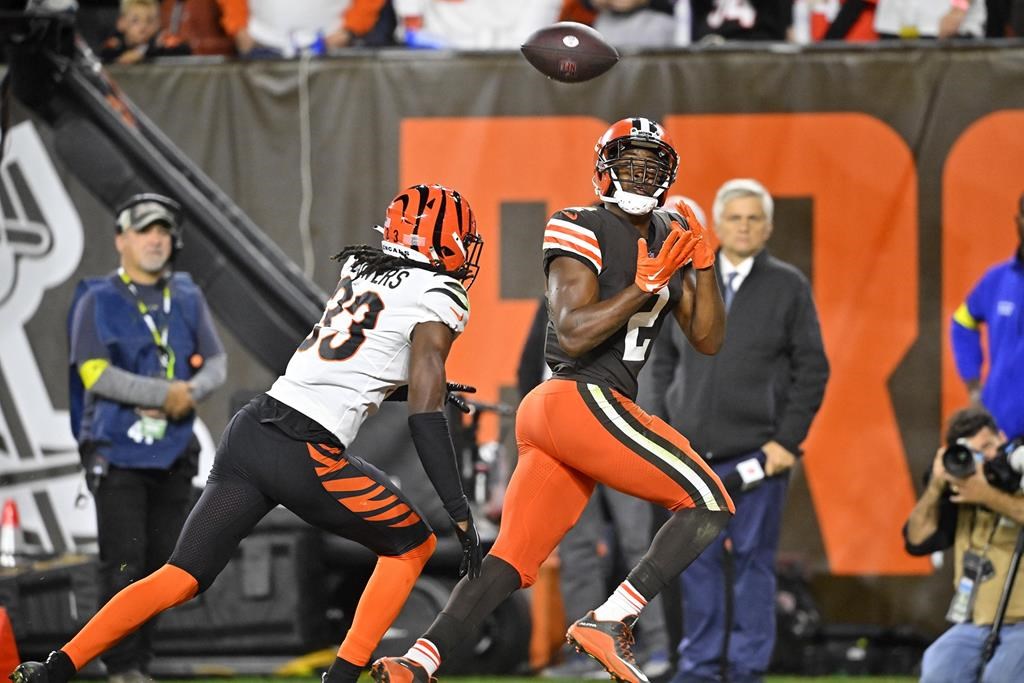 CLEVELAND (AP) — Amari Cooper has been everything the Cleveland Browns hoped, providing leadership and high-quality play from the moment he arrived via trade from Dallas. He has been a standard of unquestioned excellence.

Except for about eight seconds.

At least Cooper was able to laugh late Monday night after his first pass in the NFL was intercepted when Cleveland’s attempt to trick Cincinnati on Halloween backfired in the first half of a 32-13 win over the Bengals.

Quick recap: Taking a pitch from running back Nick Chubb on a reverse, Cooper ran right and looked downfield in the direction of rookie receiver Michael Woods II, who had space behind Cincinnati’s secondary.

With pressure coming from Bengals linebacker Logan Wilson, Cooper panicked and floated a pass that was intercepted by safety Vonn Bell, who had so much time to get under the ball he could have called a fair catch.

Cooper wanted to throw the ball away, and simply couldn’t.

“It was terrible. I don’t think they’ll have me throwing any more passes,” Cooper said, cracking a smile. “It feels like the whole world is watching you when you make a bad play like that. I understand that the game is long and there are ample opportunities to make up for the bad plays that you make.”

The play was a head scratcher on numerous levels, and especially because it involved Cooper, a detail-oriented, route-running technician and no-nonsense pro who rarely makes mistakes — and if he does, they usually aren’t nearly this egregious.

More fundamental than flashy, Cooper’s a throwback in a league loaded with players more concerned with how they look, than how they play. He has been a breath of fresh air for a team that spent much of last season absorbed in Odell Beckham Jr.’s drama.

Cooper has played at a high level for the Browns (3-5), who snapped a four-game losing streak by beating the Bengals for the fifth straight time and heading into their bye week feeling much better about this season.

The 28-year-old Cooper leads Cleveland with 39 catches for 553 yards and five touchdowns. In a game the Browns had to win or risk fading into November obscurity, Cooper had 131 yards receiving on just five catches and scored a touchdown.

He has developed a strong chemistry with quarterback Jacoby Brissett, and their bond was evident on the 4-yard scoring play. Seeing Cooper in one-on-one coverage, Brissett waited for him enough to make a quick inside move before breaking out and hauling in the soft pass.

Later, after the Bengals had scored their first TD, Cooper and Brissett hooked up on a gorgeous 53-yard pass.

Although Cooper was covered by two defenders while sprinting deep in his route, Brissett launched his pass anyway.

“Because it was Amari,” Brissett said matter-of-factly.

Sure enough, Cooper extended his arms and snagged the ball with a diving catch to set up another touchdown by Chubb that buried the Bengals.

When he got back to the bench, Brissett said backup QB Joshua Dobbs marveled at Cooper’s closing speed.

“I saw him slow down, and I was like, ‘No, I am throwing it,’” Brissett said. ”I tried to throw it out far enough that if he didn’t get it, nobody got it. He obviously made a great play in going to chase it down.”

Cooper’s sensational catch — he seems to make a tough one every game — and another steady performance surprised no one with the Browns.

He has been on point since being acquired in March from the Cowboys for a fifth-round draft pick, a swap that appears to be a steal for Cleveland, which did have to assume his $20 million per season contract.

To the Browns, Cooper is worth every penny.

“I enjoy watching him and the quarterbacks work together, rhythm up and talk about different routes. He’s a consummate professional, and he’s a talented football player. For his size, the way he’s able to come in and out of breaks. He wins down field. He can obviously win at the line of scrimmage and tracks the ball well.

As long as he’s not pretending to be a quarterback.

Brissett took a playful jab at his teammate for a pick they’ll both remember.

“That play is not in (the playbook) no more, I’m just letting you know that,” Brissett said. “Luckily, he can run routes.”

Cooper’s not planning any more aerial displays. At least only with his hands, not his arm.

“I’m just going to stick to getting open. That’s it.”

That’s enough for the Browns.