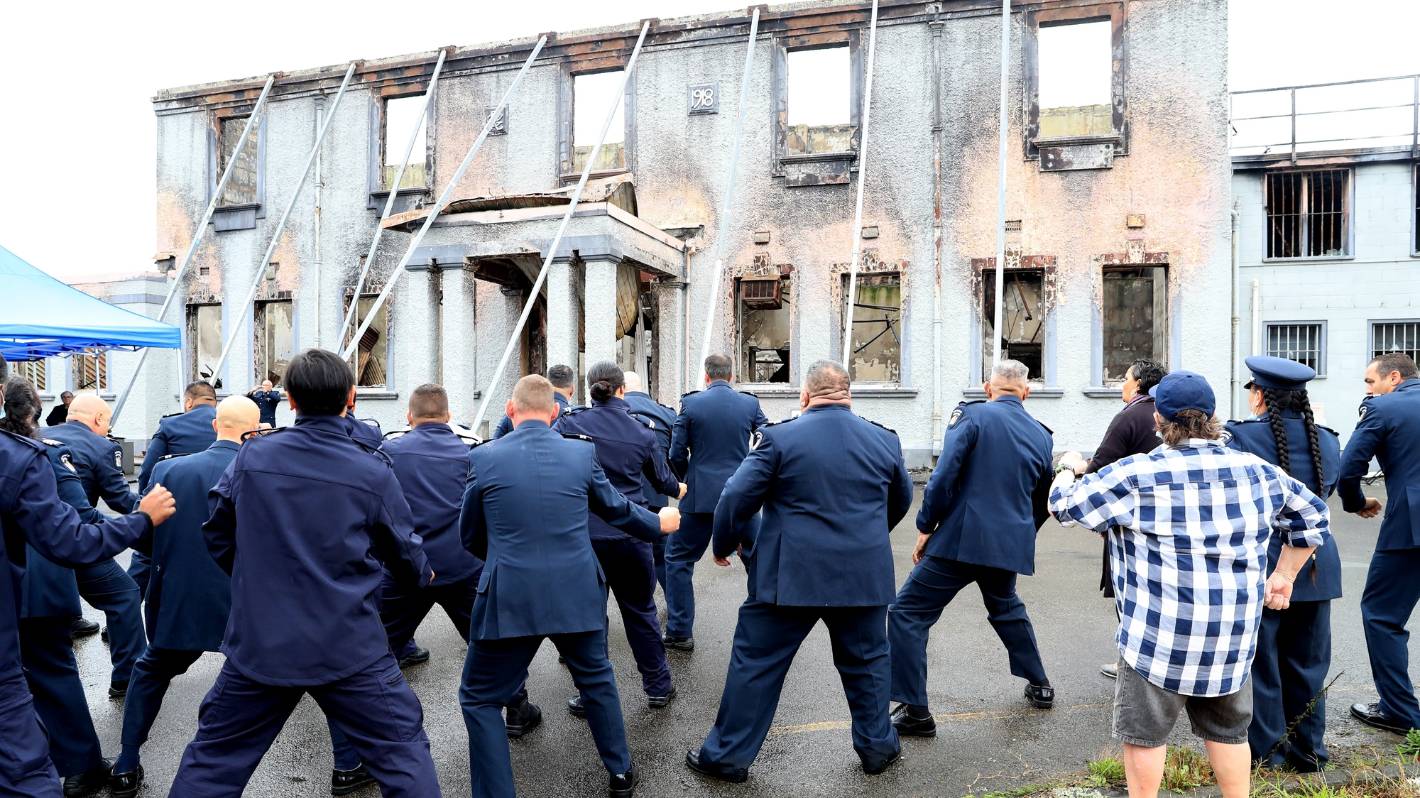 A yellow flower was placed on the crumbling structure of Waikeria prison’s top jail as it was formally farewelled on Friday.

The 111-year-old building, which used to be the high security unit at the prison south of Te Awamutu, was blessed on Friday ahead of its demolition next week.

The “old lady” which once stood tall on the 1000 hectares, and was the second-oldest operating jail in the country – has been reduced to a shell of itself after the December riot of 2020.

The riot which lasted six days saw inmates set fire to the building resulting in the structural integrity being seriously damaged, and about 200 prisoners evacuated.

Inmates were said to be protesting the dilapidated conditions and the Department of Corrections’ strategy for Māori.

Seventeen men face charges over the riot, including committing burglary with a weapon, rioting, wilfully setting fire to property, and riotously destroying property.

Friday’s blessing was attended by Corrections Minister Kelvin Davis, corrections officials, and staff past and present.

For operational manager Tony Kahura it was an emotional day, having started work at the top jail as a corrections officer in 1983.

“It was a wananga, it was a place to learn for new staff, and we certainly learnt a lot from the older staff back then.”

Kahura said it has been hard seeing the building sitting there for the past 18 months.

“It used to be active, it used to be a living building – there used to be a lot of activities in it. It was a place that offered people warmth, meals, and laughter. For me, it’s like a marae.”

It stirred up plenty of memories for Kahura.

“That brought tears when we were doing the haka.

“When I was standing there I would look up, and it gave me memories I could see the faces of the officers that are no longer here, so I knew they were standing there having tears also.”

Kahura likened the farewell to a tangi.

“You have your say, you share your tears, you give your koha, and you go away, and it will always be part of a memory.”

He wasn’t on site when the riot occurred.

“I had my mokos around home, I sat there, and I cried when I watched it. I cried because of the taonga that is in there.”

There is hope that some taonga will be rescued when demolition of the building begins on Tuesday.

Corrections Central Regional Commissioner Terry Buffery said all the buildings at the top jail will be demolished and removed by McMahon Services, including the car park.

“There is 111-years of history in this site, and that means there is a lot of taonga that remains in this site. We’ve not been able to retrieve it, I know there are a couple of carvings on the roof that I’ve seen from drone footage.”

As much of the taonga that can be saved will be stored with some being placed in the new facility.

When the site is clear it will be grassed and significant taonga will be buried on the footplate of the old building and a memorial will be put in place that will consist of a pou or plaque.

It’s expected to take a year to clear and build the memorial site.

In 2018 the top jail had been earmarked for demolition and a new build of a 500-bed high security prison at Waikeria as well as a 100-bed mental health facility on site.

The facility was originally set to be completed in early 2022, however Covid-19 delays have seen that pushed out with it expected to be finished by the end of 2023 and operational in 2024.