As the climate warms, Wellington’s underwater forests are in trouble 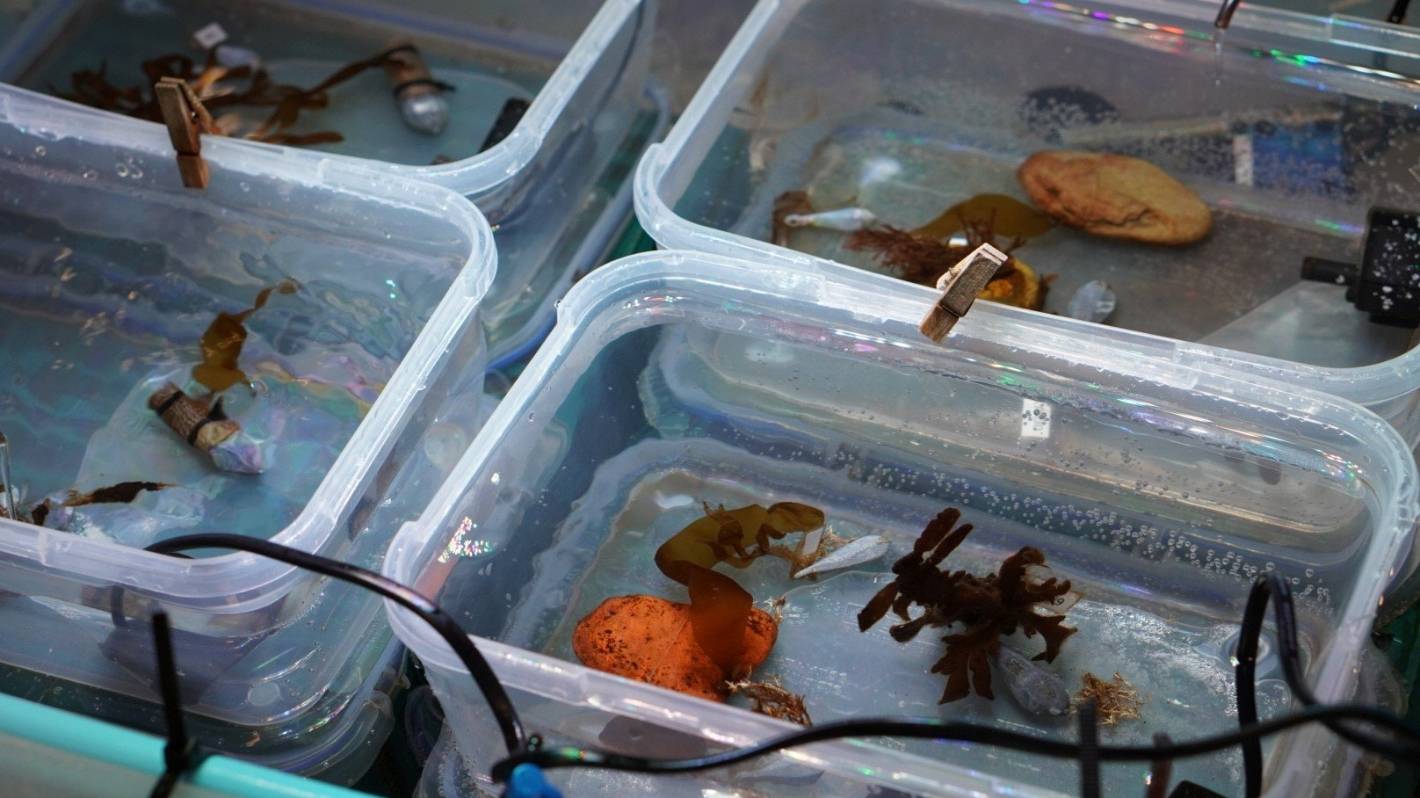 As part of the Love Rimurimu project, different species of seaweed are being grown and tested in the Wellington University Coastal Ecology Lab with hopes of learning more about how they’re affected by marine heatwaves.

There’s a forest all around Wellington – you just can’t see it.

Under the waves whipped up around the capital’s coasts, and inside the harbour itself, seaweed is a habitat for marine life, a filtration system, and a natural carbon sequesterer.

But our seaweed is in peril as ocean temperatures rise due to climate change – and Wellington is right on the cusp of being too warm for certain types of seaweed to thrive.

The project sets out to discover how ocean acidification and temperature rise affects our integral seaweed species, and how we can stop their decline before it’s too late.

Project lead Zoe Studd said anecdotal evidence showed there used to be giant kelp at Castlepoint a decade ago – it wasn’t there any more.

“Wellington is in quite a cool spot, because we haven’t lost all of our seaweeds yet,” she said.

“In Wellington we’re finding a state of decline – and that’s because of the state of our harbour and some of the pressures that are on it – it’s also an opportunity to interrupt that decline now, rather than wait until it’s all gone.”

The project grew out of an education programme, part of Mountains to Sea Wellington, about three years ago. Niwa and Victoria University are big supporters, contributing scientists and lab space.

The Wellington Community Fund got the project off the ground with a three-year funding commitment in 2021, and a new funding boost from the Wellington-based philanthropic Clare Foundation will see the project ramp-up research as it heads into the second year of the project.

“The funding from Clare is supporting critical research around developing and setting up a spore bank and optimising seaweed growth and survival rates,” Studd said.

Clare Foundation chief executive Alice Montague said it was a great fit for them. “The incredible work being done by the Love Rimurimu project will set the benchmark for seaweed reforestation into the future.”

Work is continuing apace. At Niwa, a seaweed hatchery is growing the first colony of seaweed “babies” which will be planted out along metres of string at the first restoration site, Māhunga Bay, in June, after a year of growth in the lab.

On the south coast at Wellington University Coastal Ecology Lab, seaweed is undergoing stress testing to find out how species react as the ocean warms.

“With the increase in sea temperatures, we know we’re going to start to see some species that are going to become locally extinct,” Studd said. So is there a way of breeding a slightly more resilient strain or improving diversity, so there’s more resilience than the population that’s here?”

There are 32 small tanks in total, with three species being exposed to three temperatures higher than normal, and a control tank for comparison.

Marine biology lecturer Dr Chris Cornwall said giant kelp, a “large, habitat-forming seaweed” in the Wellington Harbour was at the northern edge of their range, and therefore sensitive to the effects of warming.

“With climate change, with ocean warming, what we’re seeing is periods of increasing intensities, durations and frequencies of marine heat waves. What we expect in the future is that our giant kelp forests are going to be strongly impacted – and have already, to some extent, in the South Island.”